I am putting off ordering from Sephora Philippines (sephoraPH) because a.) the prices at that beautiful shop are not exactly inexpensive, and b.) nope, there’s no letter b. I am just super broke to order from Sephora (specially after my Sephora BKK Haul).

But last Black Friday (November 25, 2016), Sephora PH had an awesome 20 percent off sale sitewide – and it was glorious. And also intense.

I remember very vividly that I was soooo sleepy 15 minutes before the sale started, but I was fighting off the urge to doze off because I was waiting for 12 midnight.

And when the clock stroke 12, sephora.ph crashed.

It was super intense. I was refreshing my phone (I was ordering via mobile phone) for a good 30 minutes before I was able to reach the payment page. Good thing I installed the Paypal app on my phone beforehand so payment was seamless.

Everyone flooded the IG posts of sephoraph about the crash and how after the crash items on their cart were already sold out. I told you, it was SUPER intense.

Imagine me, very sleepy and was super worried if I’ll be able to snag some items on this awesome sale. The things I’ll do for makeup.

I received a confirmation email from Paypal (NOT SEPHORA!) at around 12:30am, so it literally took me 30 minutes of refreshing and wutnot to actually place my order.

I didn’t even receive a confirmation email from SephoraPH until 1:40-ish am, telling me that they were processing my orders. I was soooo worried because the ladies at SephoraPH IG were complaining how even after payment, Sephora told them that their orders were cancelled.

However, I took the 1:40-ish am as a confirmation of my email. Also, SephoraPH already charged my credit card a couple of days later so all hell will break loose if it turned out my order did not push through.

But wait, here are the stuff I bought. I only ordered two products – both Too Faced – and one deluxe-sized product.

Here were my loots:

SephoraPH’s brand choices is NOT really great, so I have to settle for Too Faced for my “Gift To Self Palette”.

I was also eyeing -no pun intended again- Too Faced’s less expensive palette The Grand Hotel Café, but that was sold out even before the Black Friday Sale.

I settled for The Chocolate Shop because I think it’s a bang for the buck specially since there are tons of eyeshadows, a bronzer, a highlighter (which I heard is awesome) and a blush. PLUS, also included are a deluxe-sized eye primer, mascara and Melted Chocolate liquid lipstick.

In context, their holiday gift special, the a deluxe Melted Fuchsia (it only came in one color) costs Php 732. A deluxe Better Than Sex mascara also costs Php 732. This means the ‘freebies’ cost almost half the price of the palette.

Yes, I am trying to justify the price #noragrets.

I wanted also to maximize the 20 percent off, so I opted to get Too Faced Merry Kissmas lip set. The set contains four lip products, so to break this down: before the sale, each lippies will cost P375.5. They now cost P300 each after the sale. NOT BAD, RIGHT?!

Since I apparently have 100 rewards points (I have no idea where that came from), I can choose a freebie. I was supposed to have two freebies but because of the site crashing, freebie number 2 was already gone by the time I finally was able to place my order.

A full size of this shadow primer costs Php 1,233.

So here they are:

So basically, I just saved Php 986! This does not include the cost of the free eyeshadow primer!

One of the things I was worried about was that my items will reach me after 5,000 years because these ship from Singapore, and I’m super sure that the Black Friday sale kept that order volume up and also kept them busy.

Here’s a timeline of what transpired:

For the longest time, the status of my order was “processing”. I was soooo worried because as I’ve said before, I didn’t know if my order really went through.

November 30, 2016; Wednesday: Because of my impatience, I emailed SephoraPH for an update. I WANTED INFORMATION!

Lo, they immediately emailed back and told me (also confirmed!) that my orders were currently being packed at the warehouse!

Can you just imagine my relief!

The email also said that there could be a delay on the shipment of the orders because of the high volume of orders they received. I mean, I was planning to open my palettes on Christmas Day (this is my fifth year doing a marshmallow test), so that did not bother me at all.

I was then directed to a third-party site for the tracking of my order. It was a pretty thorough tracking.

December 6, 2016; Tuesday: MY BABIES ARRIVED AT OUR DOOR STEP! YAAAZZZ! 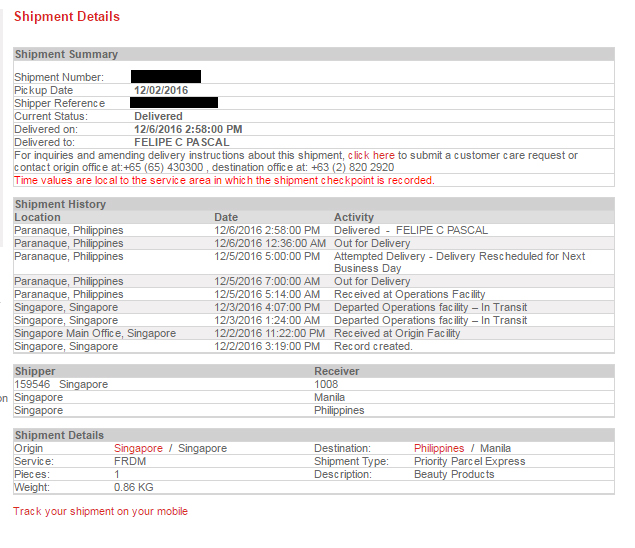 It was REALLY fast, even with all the crazy Black Friday sale. 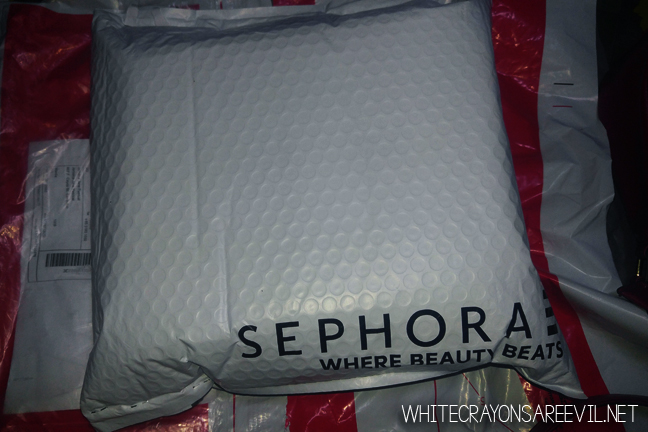 If you’re worried about stuff getting broken inside your package, then don’t. There were literally three layers of bubble wraps surrounding my babies – including the bubble-padded white pouch. 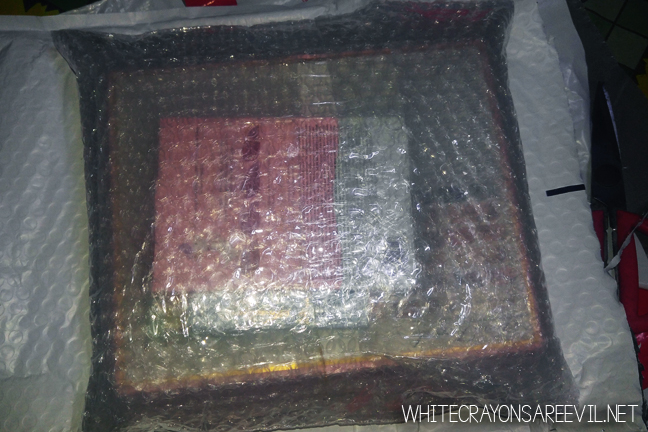 So, here’s the Too Faced Melted Merry Kissmas The Ultimate Liquified Lipstick. Here’s a review. I didn’t include this on my marshmallow test because I am using the red shade on a wedding this Saturday. Haha. 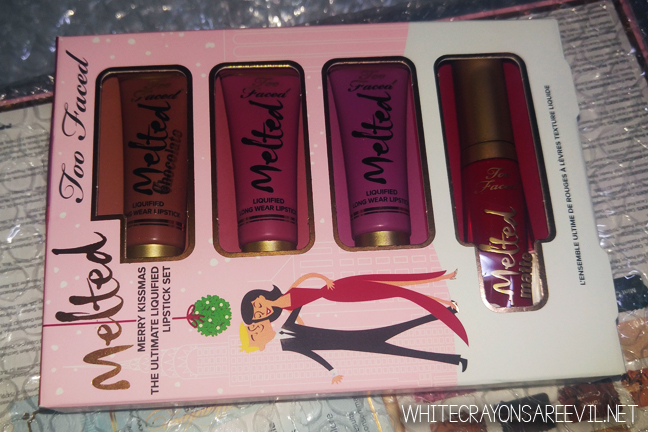 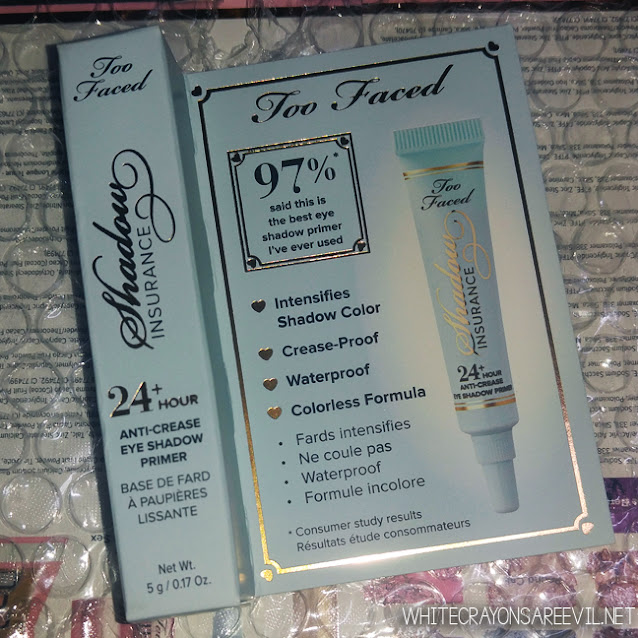 And of course, the highlight of this purchase, my Too Faced 2016 Holiday Palette – Christmas in New York The Chocolate Shop Palette. I haven’t opened it yet, so I will probably post swatches next year. 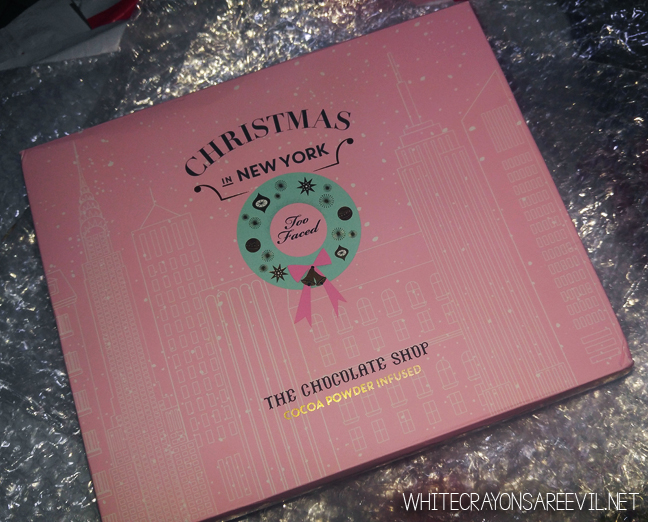 There you go! I’m so happy with my first Sephora Philippines order! <3

Do you want me to feature something here on Feature Friday? Leave your suggestions at the comment box below. Please do check out my other Feature Fridays here 🙂