After breakfast (free with lodging), a van picked us up from our temporary residence in Puerto Princesa for our (apparently) very long trip to El Nido.

I was expecting a 4-hour drive, but we arrived in El Nido late in the afternoon. It was at least 6-fureeking-hour ride.

I think it could be driven for 4-hours, but out little group of travels was delayed because: a.) a kid got some sort of motion sickness and threw up inside the van so we needed to clean stuff in a stopover. b.) two foreigners didn’t know that there were no available ATMs at El Nido, so we needed to make a detour for an ATM.

PROTIP! If you’re going to El Nido, make sure to stock up on cash.

Puerto Princesa is at least 4 hours away from El Nido, so is a decent bank and ATM machine. There was an ATM in one of the towns we passed on, but I think it did not accept the foreigners’ card because they came back to the van defeated (I think it was only a rural bank). Good thing Filipinos are always helpful. The girl seated next to the two foreigners offered to let them stay at her hotel, and told the foreigners to ask someone they know in Manila to wiretransfer them money via Palawan Express Pera Padala.

So, was the 6-hour drive worth it?

Just look. Actually, don’t. Pictures will not do El Nido any justice. 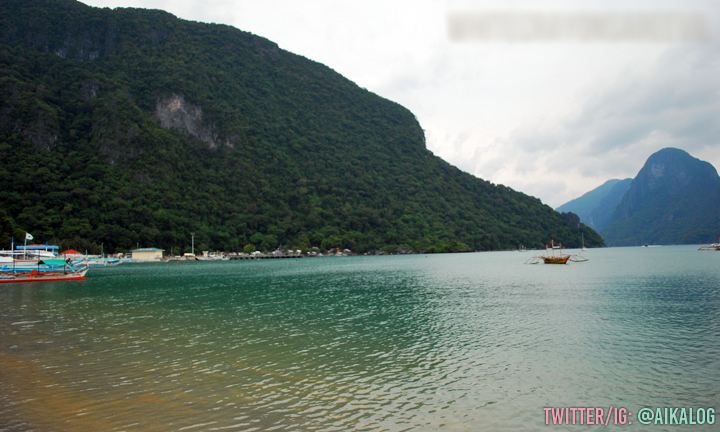 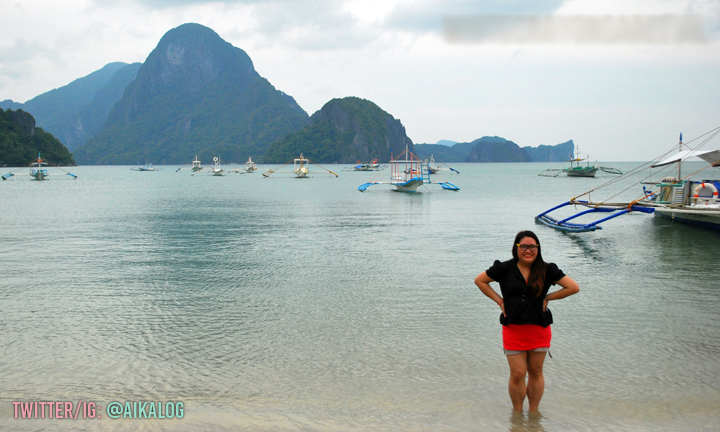 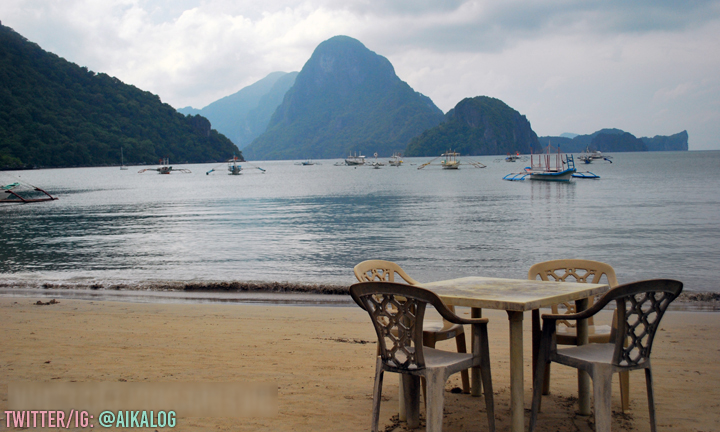 We grabbed some food at Sea Slugs Bar and Restaurant which was near the shore and was pretty pleased with it. It’s a little pricey for backpackers, but the serving was large. 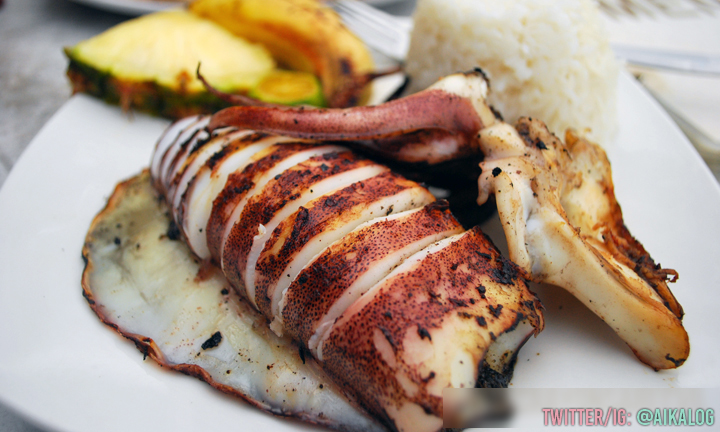 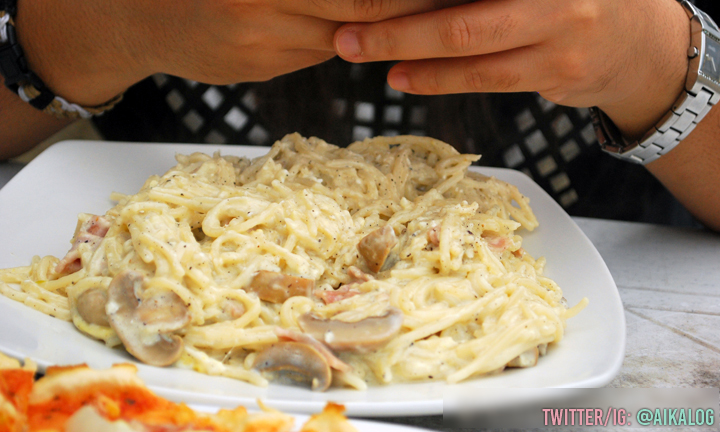 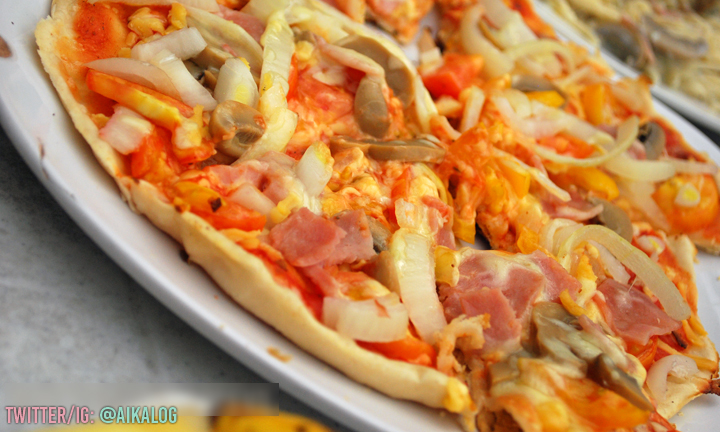 Anyway, we went back to our hostel (can’t remember the place sorry!) and rested. We went out that night but I can’t remember much on what happened. It was all blurry #alcohol

PROTIP! as of the time we were there, there was no electricity in the municipality on certain time (6am to 3pm? I honestly can’t remember). We were not able to actually experience this since we were out most of the time anyway. But I suggest you bring some powerbanks.

The next morning (breakfast was free with lodging), we went on and enjoyed the paradise more. Yey for tours!

It’s really not that hard to look for island tours in El Nido. The hostel arranged the tour for us, so no worries there.

We just went to the shores and the tour guide was already waiting for us. Our tour guide was Manny P (let’s call him Manny P but that’s not really his name. Guess why Manny P. clue: boxing).

With us in the tour were a Filipino couple and some Spanish tourists. Hola!

The big lagoon is a wide lagoon with emerald-colored water. I was VERY breathtaking. Since it’s the first stop of the tour, me and my co-tourists were very much silenced by the beauty.

The boat navigated between large rocks for some minutes and stopped in a shallow area, allowing us to dip into the pristine water. OMG it was incredible (aside from the fact that I don’t know hot to swim. Lifevest are lifesavers, indeed). The water was so clear, it’s perfect for snorkeling.

This was the most challenging part of the tour.

Our boat stopped about several meters away from a towering limestone cliff. Manny P told us to alight the boat and go ‘there’, pointing to the rocky wall. We were so confused. “Where?” we asked. “There,” Manny P insisted. We looked harder and indeed, there was a small opening in the rocks. I had a minor panic attack.

I immediately told Manny P “I don’t know how to swim!” and he assured me that the water to the opening was not that high. I was really not. Maybe only chest or waist deep

Because it’s the rainy season and it was very windy, waves were somehow large and angry. We were being guided by Manny P and his amigo so we were somehow safe. When we reached the opening, Manny P guided our head while entering. Also, we had to wait for the gush of water to be gone before forcing our bodies into the entrance of the small lagoon.

The secret lagoon is a small circular-ish lagoon with cool water. Nothing really particularly remarkable aside from the very challenging way to get in.

Manny P brought us to this small beach for lunch. Well, lunch was included in the tour, and it was really amazing. The lunch consisted of fish, pork, rice, vegetables and fruits. I am so proud of our food.

You can lay down in the beach while waiting for the food.

Small Lagooon is like a Secret Lagoon, but enlarged. When we arrived, we saw some boat parked near a rock wall, but no people AND beaches in sight. We were like “where are the people?”.

Again, we swam into a small opening (but bigger than the one in Secret Lagoon) and there they were, the people. There were some very deep parts of the lagoon (judging by the darker shade of blue color of the water). There were some tourists doing some dives, and it’s fun.

This was our last stop – the 7 Commandos Beach. It’s a long stretch of white beach where we were allowed to just seat and absorb the beauty of El Nido.

Keep in mind that we went there during the rainy season (it was in fact raining during the tour), so, no sunburn *insert sad face*. However, this did not robbed us of the wonderfully divine color of El Nido.

Here. Look at those gloomy skies, but glowing water. It was immaculate. 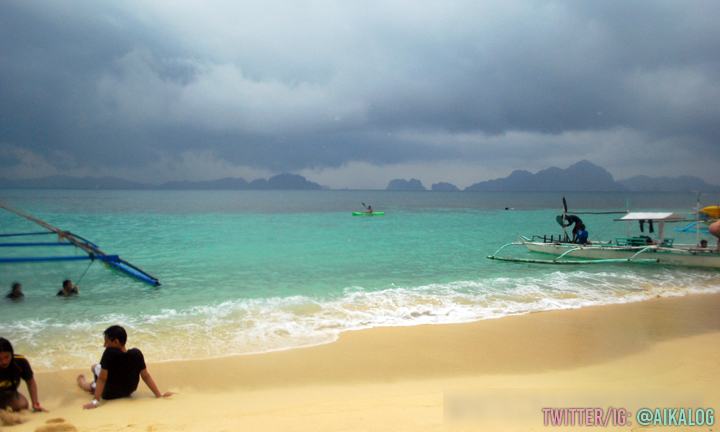 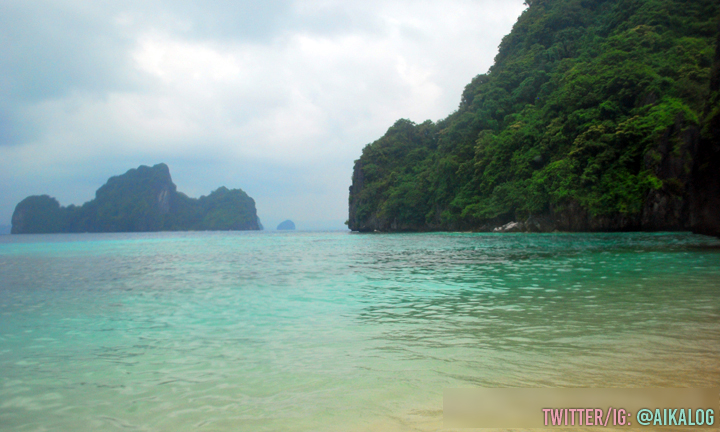